I have given up bras. I used to be so self-conscious about my ever-so-slightly lopsided boobs that I wouldn’t even have sat around at home without one, and my fear of getting gawked at for my bigger than average chest kept me wearing them every night out. Over the last few years, however, things have changed; with the rise of – and my participation in – the #freethenipple campaign, as well as my fuck you attitude to people who objectify women by reading FAR too much into something as innocent as a breast, going braless just wasn’t a big deal any more. Soon, I was throwing caution (and my underwear) to the wind, starting with nights out and fancy dinners until I eventually just gave them up all together.

Don’t get me wrong, I still adore bras on many levels – they can be super sexy in a lingerie set or shown off a little to add something to an outfit, plus I am still a slave to sports bras when I’m at home because sometimes it physically hurts to go without one. Bras are great, I just don’t think that any girl should have to say no to that super low-cut body or on-trend backless dress, and some of us just aren’t blessed with the boobs to go entirely support-free all of the time. My boobs have been huge and sore lately – a totally normal things that happens to girls all of the time, especially if you’re on your period – and I just haven’t felt quite as confident going out with nothing at all, so I decided to give Bye Bra a go.

Bye Bra describes itself as an ‘adhesive breast lift tape’, and comes in sizes A-C, D-F, and F-H. The tape itself has guidelines on where to cut to your size, so if you’re a size DD like me, you can order size D-F and cut it down to fit you perfectly. The pack comes with three pairs, plus three pairs of little pink flower-shaped nipple covers. Prices range from £17.95 – £22.95 depending both on size and whether you want silk or silicone nipple covers. They also come in a ‘dark’ option for those with darker skin. I chose a size D-F with silk nipple covers in nude. 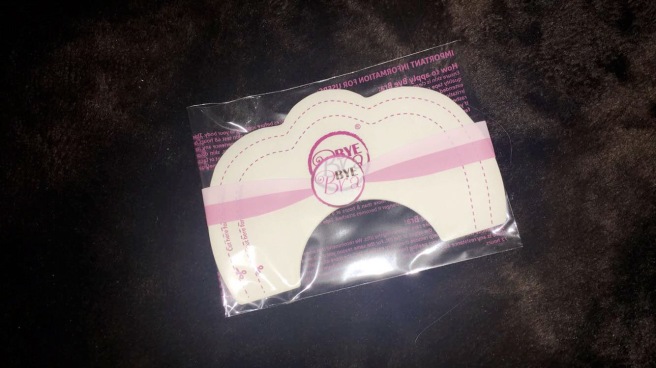 To try them out, I followed the instructions to clean and dry the chest area thoroughly, as well as cutting the tape to size. I then applied the product by removing half of the protective cover, sticking it onto my breast and lifting up before removing the other half and securing it further up my chest. I then applied the nipple covers.

I was immediately impressed – the product definitely worked better than I had expected, and the nipple covers looked super cute. The tape is see through and relatively matte, so it blends with the skin well. The lift felt secure, and like it would last for a pretty long time, and I liked the fact that you could decide whether to give yourself a little natural lift or whether to go all out with a high, round cleavage. This also came in handy with the aforementioned wonky boob issue, as I could lift the smaller one a little more and even out my cleavage. 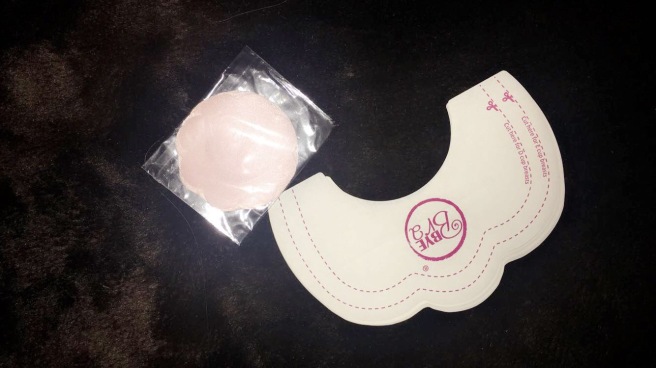 The body I was wearing is very strappy with a wide neckline in addition to a deep plunge, so Bye Bra was visible even after I had cut it down. This won’t be a problem for backless or strapless dresses, but if you’re going for a plunge I would recommend using a bit of double-sided clothes tape to stick your top to the product and avoid it popping out.

When it came to the time to take Bye Bra off, I was impressed with how easy this was despite how well they had stayed on all night. If anyone has seen my Tab article about duct-taping my boobs up then you’ll know I am no stranger to pain – on that occasion I nearly lost a nipple – but removing this product was a breeze, nipple covers included. The first time I wore nipple covers was in fresher’s week, and they were so determined that I kept them on all week until they eventually fell off in the shower, so these were much nicer and easier to remove!

Overall, I was impressed with this product and will definitely be using it again from time to time, when I feel like I need a little lift. Three pairs to a packet gives good value for money, and the customisable shape means that anyone can wear them.

Head over to https://byebra.co.uk/ to try them out for yourself.

*The products reviewed in this post were sent to me for free, however the post reflects my own honest opinions

Hello, I'm Alexandra Harvey. I'm 21 years old, and I have a degree in English from the University of Birmingham.
Follow lexirowan on WordPress.com